Book a golf Holiday in Tenerife and stay at the Be Live Experience La Niña is an exclusive All-inclusive hotel in the south of Tenerife.

The Be Live Experience La Niña hotel is in Costa Adeje, in the South of Tenerife, next to Puerto Colón and Fañabé Beach.
It offers its guests 3 swimming pools (1 for children and 2 for adults, one of them heated in winter), mini-club for children, gym, Spa, and multiple and different activities designed for all ages.

In addition, guests staying at Be Live Experience La Niña hotel will enjoy VIP services and rooms especially designed for those travelling with their family (Better Together) or as a couple (Adults Club). The hotel’s gastronomic offer includes 2 lively bars and 2 restaurants (buffet and à la carte).

The Promo rooms of Be Live La Niña Hotel offer modern and comfortable spaces for you and your family in the best area of Playa La Pinta. Its 20 m² and a unique interior design make it the best destination for your holidays in Costa Adeje.

Each room is equipped with all the services and facilities you need such as:

All Inclusive Restaurants and Bars

Tenerife Golf Holidays. Enjoy Tenerife’s great climate when booking golf holidays Tenerife golf del sur. Of the highest standard, that offer a unique golf holiday experience. There is a challenge for every golfer at every level. The great scenery of mountain ranges before the Atlantic Ocean provides the best value for your golf break

Great golf courses in Tenerife include: Golf Costa Adeje The Golf Costa Adeje (Championship Course) was designed by renowned golf architect Jose Gancedo, who used the natural features of the land (the original banana plantations) to integrate them into the course. The fairway in Paspalum and the greens in tif Eagle make it possible to irrigate the course with recycled water. 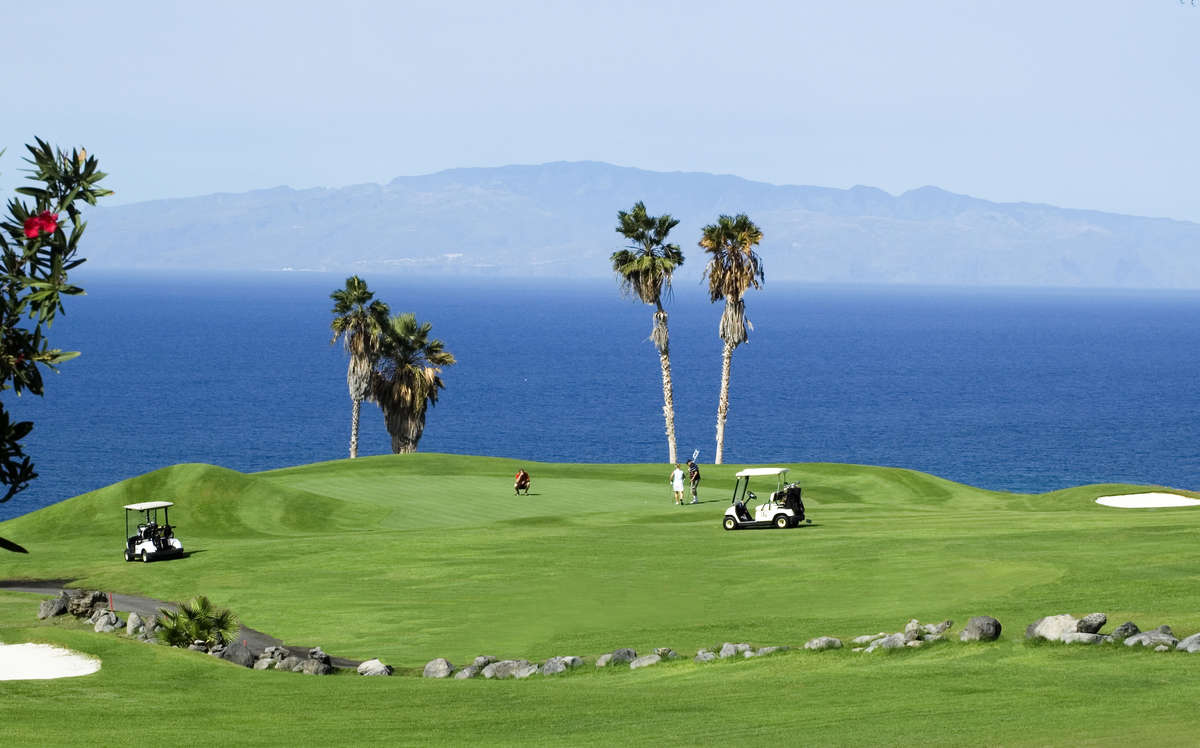 Buenavista Golf at Meliá Hacienda del Conde The 18-hole-course, designed by Severiano Ballesteros, is situated directly at the sea, 5 greens are situated in immediate proximity of the steep coast, where the waves break and offer the players a spectacular show. Several holes lead you to believe that you are driving the ball directly into the ocean! A lake with a water falls as well as the clubhouse, situated in the middle of the course, give the course and additional flair. 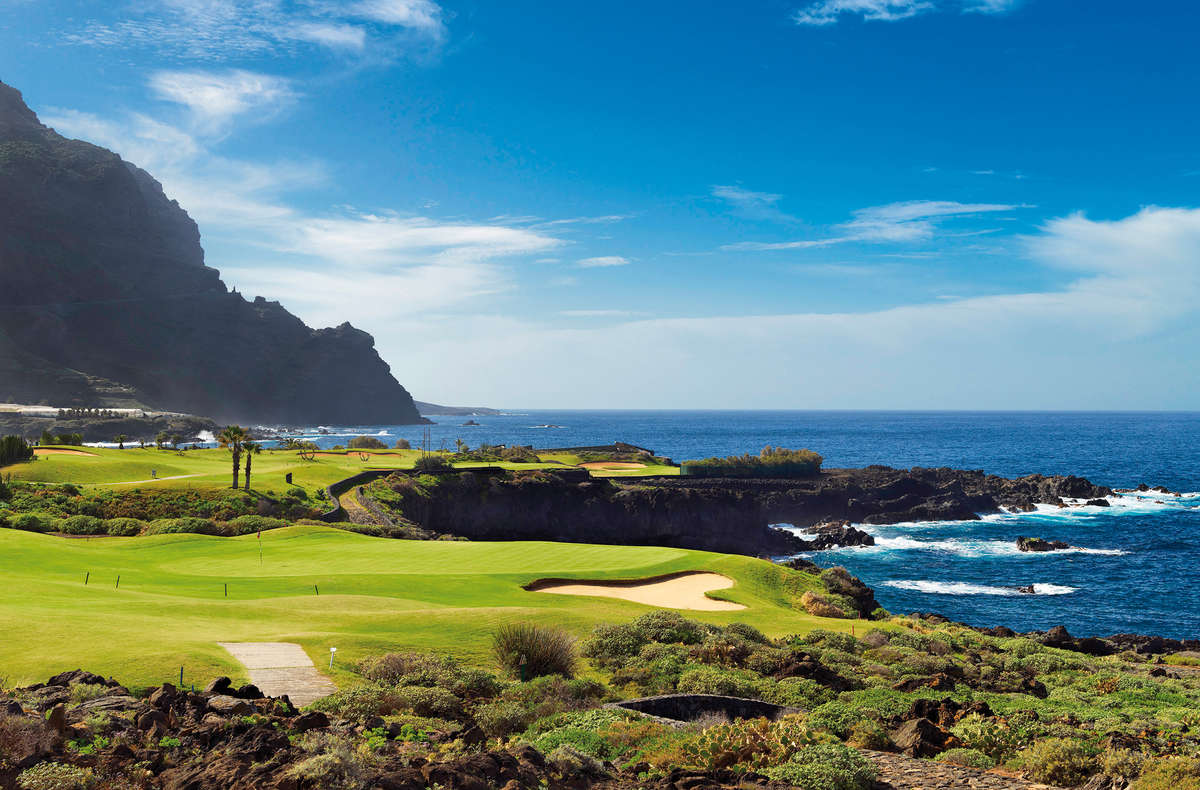 Golf Las Américas You play in the slipstream of the surrounding hills at a slightly semi-circular slope, which opens towards the sea. The climatic conditions are ideal both in summer and winter. The course is characterised by several lakes and canyons. 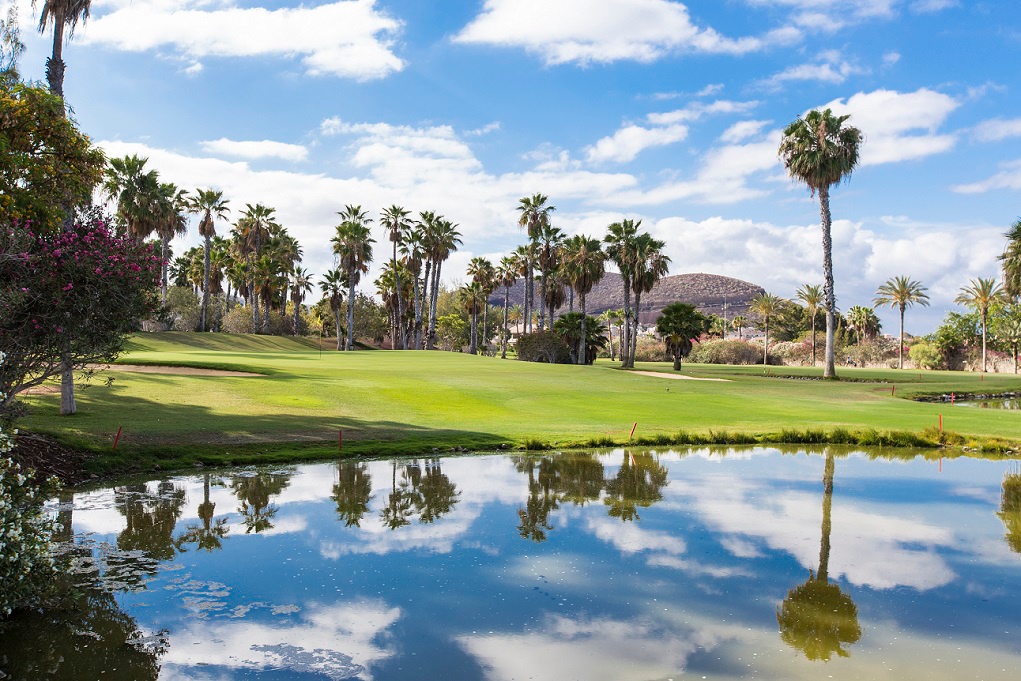 Abama Golf Abama Golf is part of the Abama Hotel Resort, which is situated in the south-west of Tenerife. The course has a club house, a training course with 3 holes which belongs to the golf school. On the undulating demanding course there are 22 lakes, bunkers with white sand and more than 90.000 palm trees, trees and other plant species, which make for a charming tropical garden. From each hole you have a great view on the Atlantic Ocean, 9 additional holes are under construction. 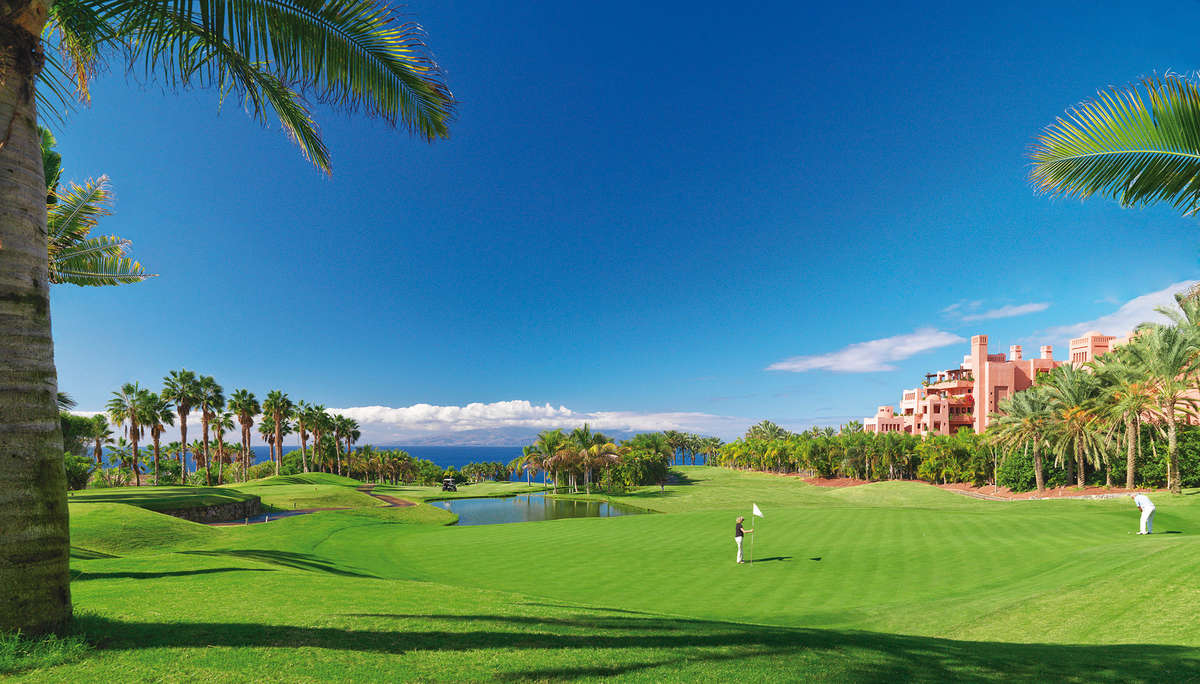 Golf del Sur A beautiful 27-hole-course near the airport, however scenically a small oasis with palm trees, huge cactuses, wide fairways and large greens. The with black lava sand filled bunkers demand precision. In 2005 the course was redesigned. 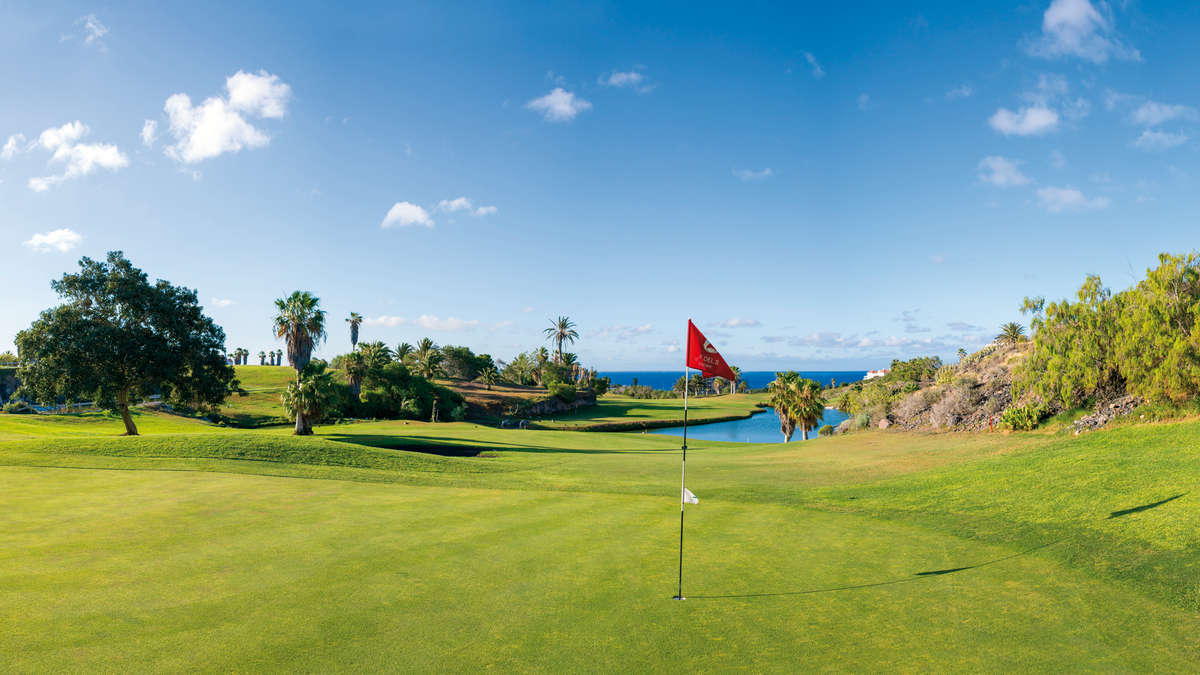 Amarilla Golf & Country Club The course, built in 1988 by Donald Steel, has definitely a left hand- character. The generous course impresses with its very beautiful design and magnificent sea view. Small greens and hilly fairways make the game of golf varied, but not too difficult. 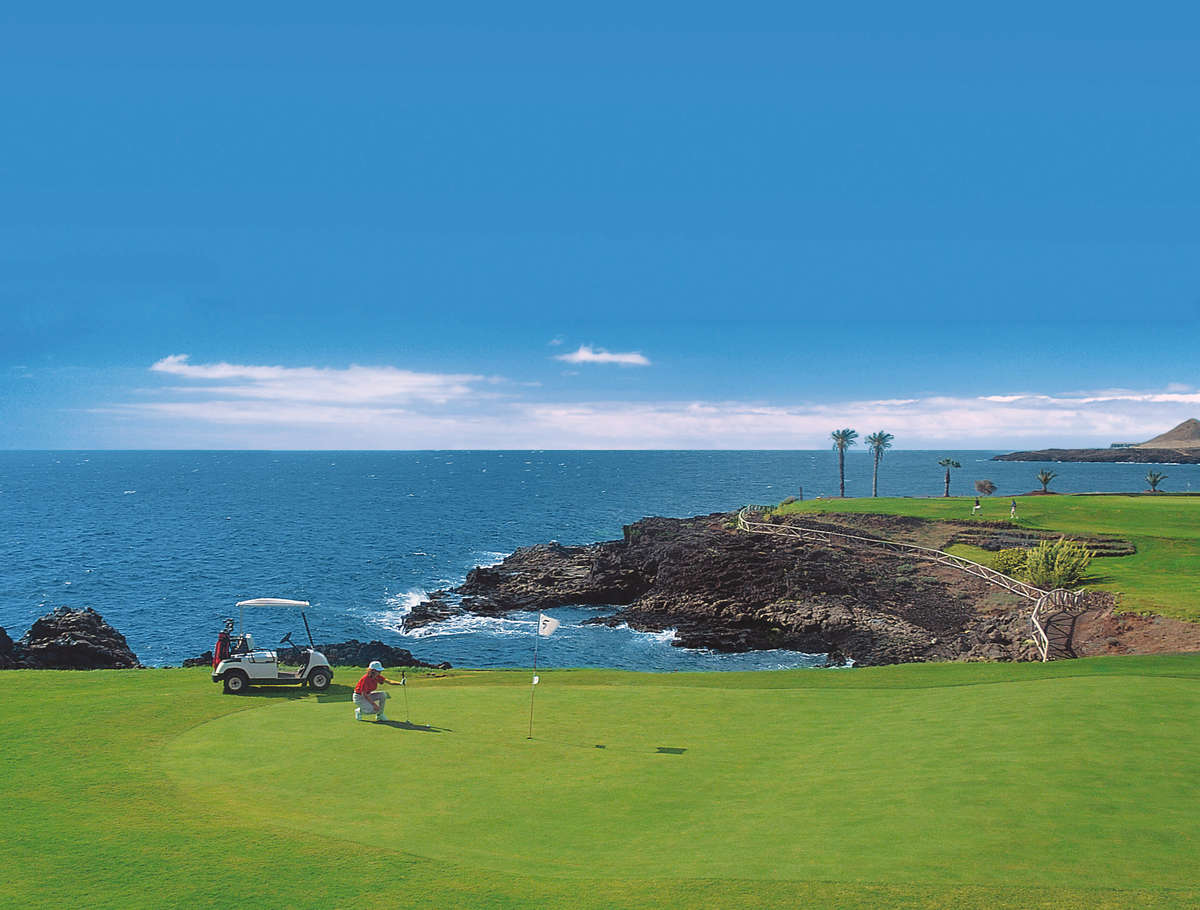 Real Club de Golf de Tenerife Even today you still feel a slight British air that dates back to the British founders of this club in 1932. Old well-formed trees, which can be found on the whole course, characterise besides wavy fairways and several canyons the picture of this course. While enjoying the magnificent view on the Teide, you easily start dreaming. However, at hole 4 at the latest- most likely the most difficult one here- you're brought back to reality. 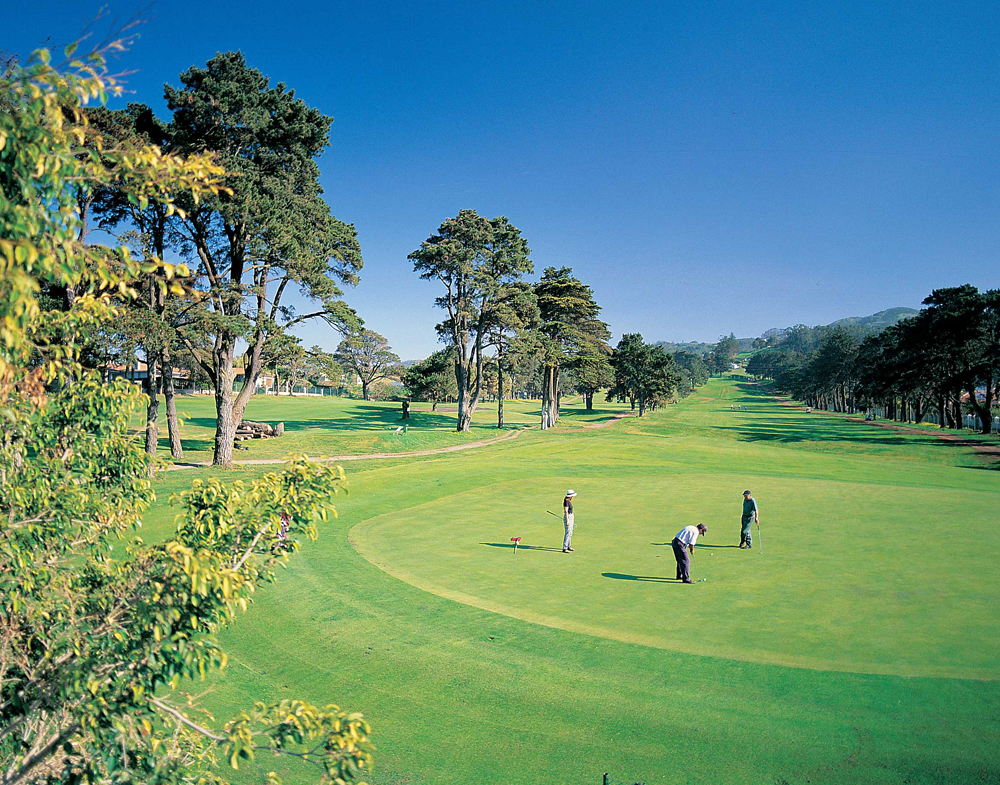 Amarilla Golf in Tenerife is one of life's hidden gems, probably the best Tenerife golf course, it hosted a round of the PGA European tour in 1990; designed by Donald Steel in the late nineteen eighties it features an imaginatively designed golf course sandwiched between the bright blue Atlantic Ocean and Spain's highest mountain, the majestic El Teide. Playing golf in Tenerife in mid winter wearing just shorts and polo shirt with the sun reflecting off the water and with the often snow capped peak of El Teide in the opposite direction can compensate for almost any amount of duffed shots.

GOLF DEL SUR course in Tenerife, first opened in 1987, with a professional tournament, has hosted since then many competitions at the highest international level. During the years 1989, 1992, 1993 and 1994 it hosted the Tenerife Open, belonging to the PGA European Volvo Tour, with victories of José Maria Olazábal in its first two editions and of David Gilford and Mark James, in the following years. In 1995, at Golf del Sur took place the Shell Wonderful World of Golf Tournament, where they confronted each other Ernie Els and Phil Mickelson.

Golf las Américas opened in 1998, designed by John Jacobs and is situated in the Heart of Playa de Las Américas. Las Americas overlooks the sea and has been host to several important Spanish Championships. The 18-hole par 72 course features several lakes and water-filled ravines. The golf course is attractively located in a natural, gently sloping amphitheatre with a par 72 and 6.051 meters in length. Among its attractions, it offers ravines and lakes which contributes to a pleasant environmental effect. It is noted for its excellent maintenance and its professionalism.

The Golf Costa Adeje has been designed by integrating the natural characteristics of the area in the course. The original wall stones, used to demarcate the former banana plantations located on these grounds, were totally restored and added to the other original landmarks of this wonderful golf spot which boasts an 18 hole course of par 72 and a 9 hole course of par 33. The last 9 holes built next to the practice drive, are a little shorter but also more technical. With stunning sea views and 6 lakes, the game becomes more interesting and fun, where people with a higher handicap can also enjoy this fantastic sport.

7 nights and 4 rounds including golf transfers from £859pp - ALL INCLUSIVE! - SEE SPECIAL OFFER!

We create tailor made short golf breaks and golf holidays to all our locations. Please email us at contactus@findagolfbreak.com for your own bespoke quote (Also, see example packages tab on the left). We wont be beaten on price.