San Roque Club offers all the facilities you’d expect of the finest and most exclusive meeting place on the Costa del Sol. The two contrasting golf courses are as challenging as they are beautiful and away from the greens, four very different restaurants serve up a stunning array of high-class cuisine, from Japanese to tapas. The equestrian centre’s top class facilities appeal to everyone from novices to experts, and if a more relaxing visit appeals, the terraces, the heated pool or beauty and therapeutic treatments are among the facilities members enjoy, while the meeting and conference rooms make this a perfect place to get down to business in a calming environment.

Formerly the home of the Domecq sherry family, The San Roque Club sits on an enviable backdrop surrounded by lush hills and historic cork oak woods. The centrepiece of the club is the magnificent Domecq mansion which oozes character. The club is set within 340 acres of peaceful and natural Andalusian where the ancient Cork Oaks dominate the landscape. San Roque first opened it´s doors in 1991 and quickly became the golf resort of choice in Sotogrande, designed by Dave Thomas the Old Course along with Valderrama and Real Club de Sotogrande became known as the golden triangle of golf.

In 1997, during the Ryder Cup held in neighbouring Valderrama, San Roque hosted both the European and American teams and their families and to this day the plaques with the players´ names remain by the door to the suites they occupied. The first event under the club´s belt was the European Tour Qualifying School Finals in 1993 held exclusively on the Old Course until 2003. Many players who have since become household names received their tour card at San Roque such as Padraig Harrington, Lee Westwood, Ian Poulter and Justin Rose to name a few. “See you in November in San Roque” became a catch phrase for those in the business as the Q School finals were held for a further 13 years at the club with the exception of 3 years in between where the finals were held in Catalunya.

In 2003, San Roque opened a further 18 holes and so the New Course was born. The course designed by Perry Dye and Seve Ballesteros is a perfect contrast to the Old as it is extremely different in design, yet presents the same challenges as it´s older sister. In 2005 the Old Course hosted the Spanish Open which was eventually won by Peter Hanson after a play off with fellow Swede Peter Gustafsson. The tournament returned in 2006, this time on the New Course with Niclas Fasth winning this time.

It is fair to say that The San Roque Club holds a place in the heart of many a European Tour professional. The club continues to welcome elite players from across the globe who come to take advantage of the outstanding conditions before important tournaments. As for amateurs, the two courses offer some of the most beautiful holes they will ever play. It´s not only professionals who enjoy San Roque as thousands of amateurs will testify each year. The courses have been designed so that both low and high handicap players can enjoy them.

Great golf courses in the Costa De La Luz area include: Islantilla Integrated into a park landscape, here are three 9-hole loops with different possible combinations. Azul requires an accurate game and is suitable for moderate and low handicaps, Amarillo on the other hand is ideal for higher handicaps, although the first courses are not all that easy, Verde is the official 18-hole course during tournaments.

El Rompido Situated in the province of Huelva, on the western side of Andalusia. El Rompido is the only golf course in the region with 36 holes (north course and south course) and no property developments surrounding it. Its two 18-hole courses, surrounded by pine and orange groves, cross the wetlands and open out onto the Atlantic Ocean with some spectacular views, giving those who play it a unique experience. 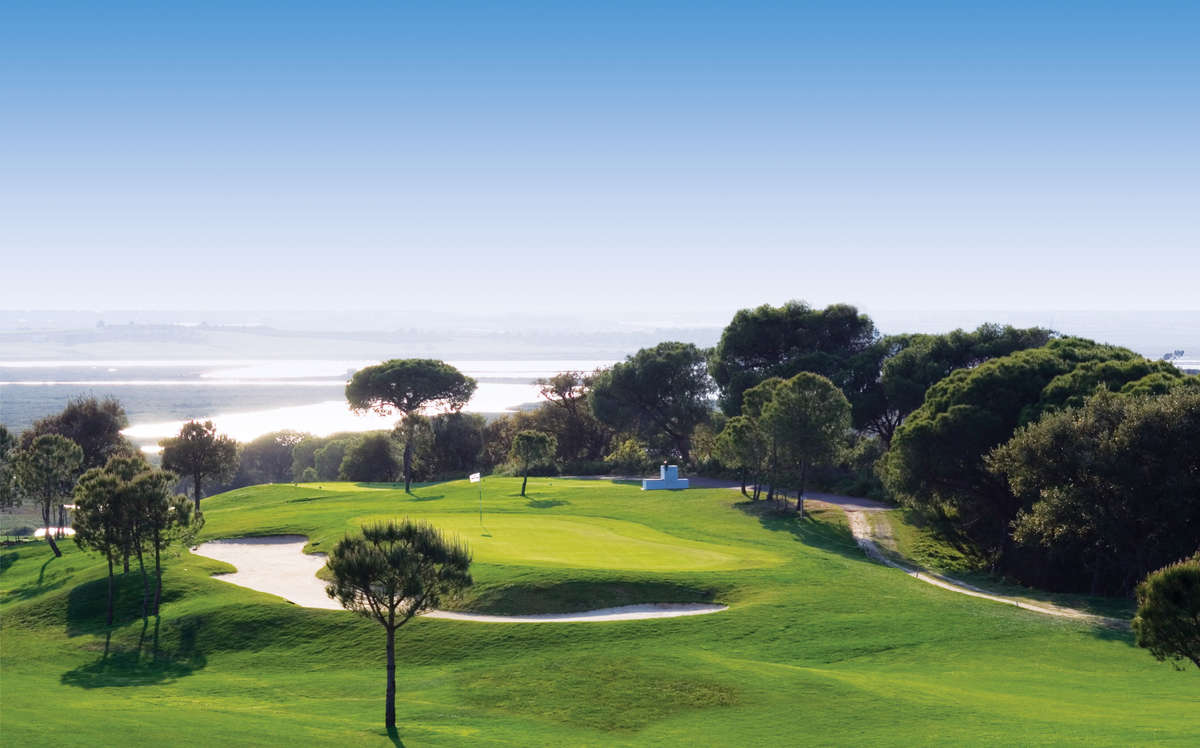 Costa Ballena Costa Ballena Ocean Golf Club - Designed by José María Olazábal - All you ever wanted from golf and more! A marvellous course studded with palm trees on the sunny Atlantic coast of southern Spain. It offers 27 Championship holes with sculpted fairways, studded with stately palm trees, and dotted with lakes and bunkers. The course is an intriguing layout on level terrain alongside wide Atlantic beaches. Players of any level are tested, but no matter one’s level, everybody will enjoy this superbly designed course and you will remember it fondly for many years. Costa Ballena Ocean Golf Course is golf the way it should be as you walk down the palm studded fairways enjoying temperate weather year round. 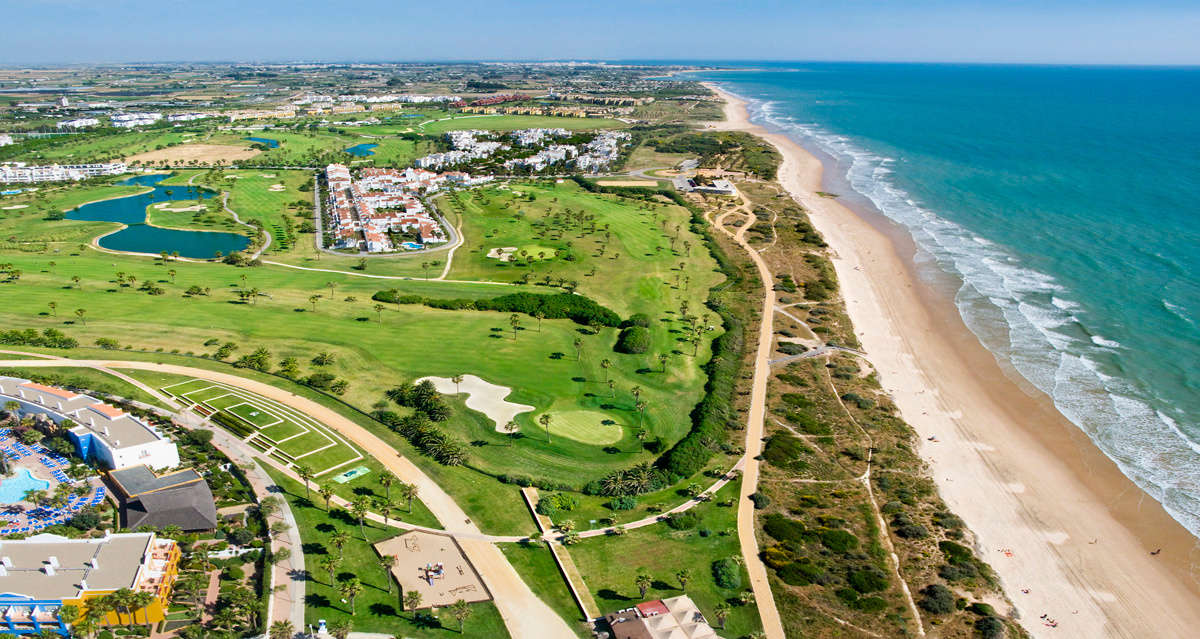 Montecastillo The world-class course was designed by Jack Nicklaus and is an experience for both beginners and practised golfers. It offers interesting variations for long hitters but at the same demands a lot of precision. Water obstacles and bunkers surround neat greens. In 1994 and 1996 this course was site of the Tour Espana Masters and from 1997 - 2001 the Volvo Masters took place here.

Sherry Golf Sherry Golf Jerez was designed by Stirling & Martin and has nice fairways and large greens. This course with its different tee-off possibilities poses a challenge to golfers of all handicaps. The 1.800 sq. m large club house with Andalusian ambience offers furthermore every comfort, a golfer could need after a round at Sherry Golf. 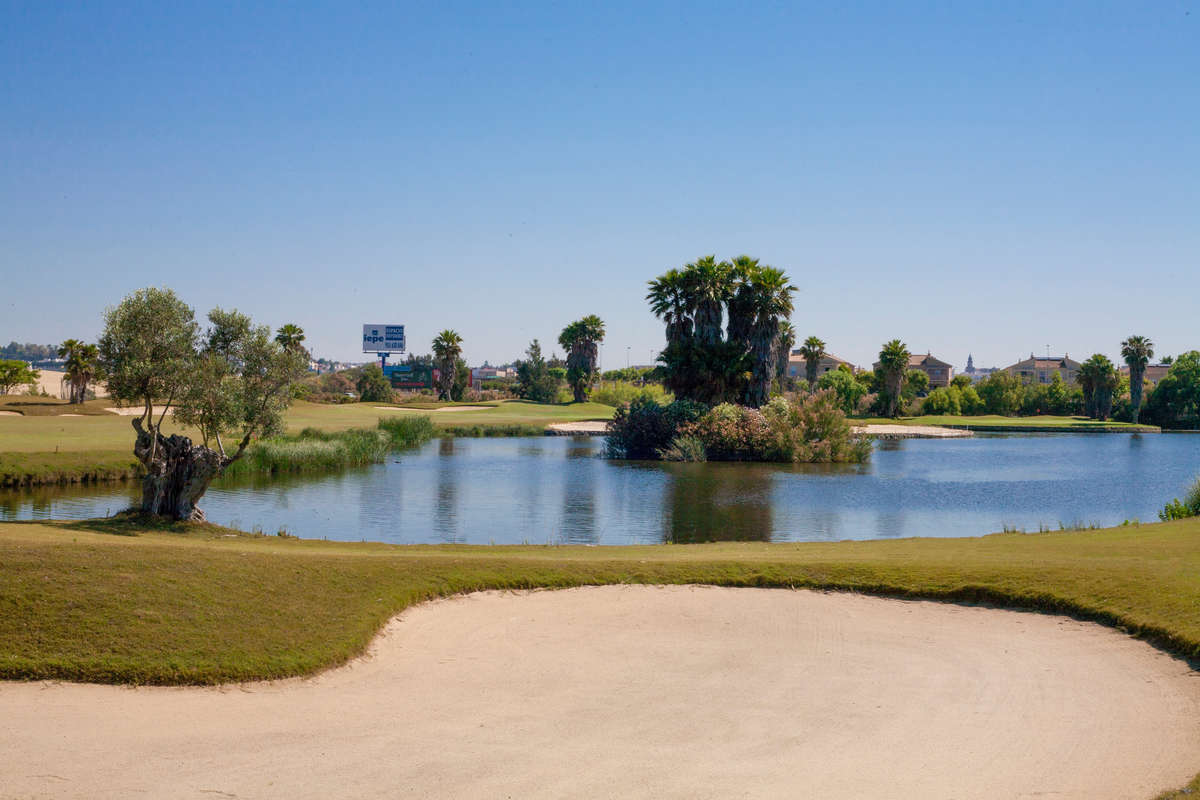 Sotogrande Already since 1964 this course by Robert Trent Jones ranks among Europe's Top Ten. The lush vegetation of eucalyptus trees, palm trees and cork oaks almost cause the golfing to fade into the background. But the possible combinations of the courses are as varied as the flora and fauna.

Plus many more!
Read more

Between Jerez and Marbella, almost at the tip of the Iberian peninsula, lies one of Europe's most exclusive golfing Country Club. Here, in the foothills of the Sierra Bermeja, the peace and natural beauty of Andalucia is complemented by a stylish retreat and an 18-hole championship golf course are enhanced by a friendly atmosphere: welcome to The San Roque Club.

This amazing course is the pride of the club, the enjoyment of it is reserved for members only except for the daily public periods when the general public can make use of this amazing fairways for a premium rate of 160€ per green fee.
This legendary course was created by Dave Thomas in 1990 with bunkers redesigned by Seve Ballestros, the Old Course is rated amongst the top 5 courses in Spain and amongst the best courses in Europe. The Old Course was the venue of the Spanish open in 2005 and the Qualifying School Finals from 1993 – 2007.

The New Course was created by Perry Dye in 2003.  It is set on beautiful natural terrain with many scenic views.  The difference between Old and New is mostly in the Dye-family shaping: big, steep bunkering, larger greens and railroad sleepers.  The course resembles a Links in many areas although it is a Parkland course.  The New Course was the venue for the Spanish Open in 2006 and the Qualifying School Finals from 2003 – 2007.